Introduction to the Sum-Check Protocol 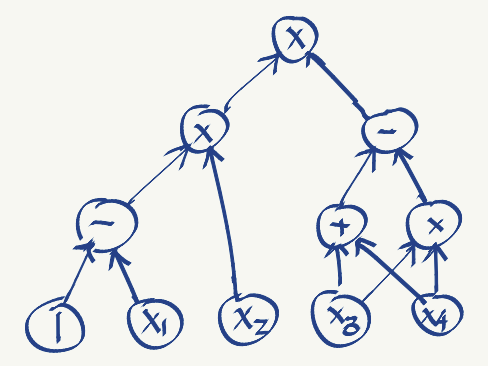 Thank you to Gokay Saldamli, Gabriel Soule, and Tomasz Kornuta for providing valuable feedback on this article.

The sum-check protocol is used to outsource the computation of the following sum:

Why would you want to sum a function over all Boolean inputs, as is done in the equation above? One reason would be if you wanted to provide an answer to the #SAT (“sharp sat”) problem. #SAT is concerned with counting the number of inputs to a Boolean-valued function that result in a true output. For example, what is the #SAT of $f(x_1, x_2, x_3) = x_1 \text{ AND } x_2 \text{ AND } x_3$? It is 1, because only a single input, $x_1=1$, $x_2=1$, $x_3 = 1$, results in 1 being output from $f$. You can probably see that it would be computationally intensive for you to solve #SAT for complex problems. With the sum-check protocol, $P$ can do that work instead of you.

Unless you are a complexity theorist, you may not get too excited about the #SAT problem at first glance. However, more practical problems can be mapped to #SAT, and then sum-check can be used. For example, given an adjacency matrix, you can use sum-check to solve for how many triangles are connected. You can also use sum-check to outsource matrix multiplication. Check out the book mentioned next for more details.

In this tutorial, we use the same example as given in Justin Thaler’s book: Proofs, Arguments, and Zero-Knowledge. In Justin’s book, sum-check is used to solve #SAT for the following example function:

In the graph of $\phi$, we see the logic symbols for AND ($\wedge$) and OR ($\vee$). Note that $\phi$ is only defined over the Boolean inputs (0/1) and that $\phi$ has a Boolean output. However, most popular verifiable computing algorithms only support arithmetic operations, so we need to convert $\phi$ to its arithmetic version. The arithmetized version is called $g$. For our example, $g$ is defined as:

In $g$, notice that the Boolean functions: NOT, AND, OR have been compiled into their arithmetic equivalents. Take a moment to convince yourself that if you pick Boolean values for $x_1$, $x_2$, $x_3$, and $x_4$, that $\phi$ and $g$ will output the same thing.

For reference, here are the specific compiler rules used when converting $\phi$ into $g$:

Notice that $g$ has extended the domain of our original Boolean formula and is now valid for Boolean inputs and integers. The facts that $g$ equals $\phi$ when evaluated at Boolean inputs and that integers are valid inputs to $g$ are leveraged by the sum-check protocol.

This section introduces the sum-check protocol. We will follow the same steps and naming convention as used in Justin’s book. The protocol steps are summarized as:

We expand the steps of the algorithm in the following sections.

1. $P$ calculates the total sum of $g$ evaluated at all Boolean inputs

$H$ is the sum described in the first equation in this article. In round zero, $P$ should perform the summation described in the first equation. $P$ assigns this sum to $g_0$ and returns it to $V$. Note that this sum is the #SAT solution, i.e., it gives the answer of how many unique inputs to the function result in 1 being output from $g$. The remainder of the sum-check algorithm is designed to ensure that $P$ performed the #SAT solution correctly.

The outputs of the above evaluations are added to arrive at $g_0 = 3$.

In Step 2, $P$ computes a similar sum as they did in Step 1, except the first variable is left free/unassigned. I.e.,

Note that $g_1$ is a monomial in $X_1$, and all other variables have been assigned values in each iteration of the loop. We refer to this monomial as the “partial sum” in the next step. Also observe that the only difference between the definition for $g_1$ and the definition for $H$ is that the $g_1$ summation is missing $\sum_{x_1 \in \{0,1\}}$.

In Step 3, $V$ checks that $P$ was consistent with what they committed in Step 0 and Step 1. Specifically, $V$ checks the following:

For the remainder of the protocol, $P$ will always replace $X_1$ with $r_1$. Note that something interesting is now happening. Up until this point, $P$ only evaluated $g$ with Boolean inputs, but now the protocol is leveraging the fact that because $g$ is a polynomial, it can be evaluated using arbitrary integers instead of only 0s or 1s. This is where the security of the protocol is derived: if $p$ is very large, it will be difficult for $P$ to guess the random challenges before receiving them.

$P$ calculates the sum again, except now they replace $X_1$ with the random number $r_1$:

In our example, $g$ has four variables, so we will cycle through Steps 3–5 four times, then we move to Step 7.

After round $v$ has successfully been checked, then $g_v(X_v)$ has incorporated $r_1, r_2, \cdots, r_{v-1}$. The last step is for $V$ to select $r_v$ and use an oracle to evaluate $g(r_1, r_2, \dots, r_v)$. The oracle is a trusted source which will be guaranteed to evaluate $g$ correctly at a single input. Alternatively, if no oracle is available, then $V$ must compute $g$ once by itself. Without an oracle, $V$ would be required to store and compute $g$ — this could be costly.

Python code implementing sum-check can be found in this repo. We omitted security checks in this tutorial for brevity, but those checks are included in the linked repo. Also, this article did not explain why sum-check is secure, nor did it cover the practical costs of the algorithm. Briefly, the security of sum-check can be analyzed using the Schwartz–Zippel lemma — it is basically like random sampling used for quality control. Regarding the costs, to solve #SAT without the sum-check protocol, $V$ would have had to evaluate $g$ at $2^v$ inputs, but with sum-check, the cost for $V$ drops to $v$ steps of the protocol plus a single evaluation of $g$. If you want more depth, see Justin’s book, which is linked above, and these resources:

1) Sum-check article by Justin Thaler: The Unreasonable Power of the Sum-Check Protocol

If you have made it this far, you now hopefully have a feel for how interactive arguments of knowledge work. This is the first time we have mentioned “interactive”. Note that $P$ and $V$ had to communicate in each round. This is not ideal in scenarios where computers can go offline, i.e., the real world. The Fiat–Shamir transform makes sum-check non-interactive. As you may know, SNARKs also eliminate interactions, as implied by the “N” in the name which stands for “Non-interactive”. SNARKs also use Fiat-Shamir. Perhaps we will make a part 2 of this article where we implement a non-interactive version of sum-check.